So I was going through my drafts and found this little blast from the past. I wrote this on my first blog (on blogger.com) with the intentions of doing a whole series on things people need to quit doing while driving. Well, I’ve decided I’m nobody to talk, proven by my fear of becoming a meme story so I won’t be doing follow up’s on things-not-to-do-while-driving but I didn’t want to edit my original post so I’m publishing as is. This was also my last post containing a drawing of some sort; I’m just not very good at it, and you’ll notice that when you see that the Barbie corvette I drew looks like a pink dildo. Without further ado, I bring you Driving Etiquette.

Let’s just all be honest, if DPS truly cared about everyone’s safety then the majority of us wouldn’t have a license. I’m no exception: I guessed my way through my license renewal eye exam with the help of the clerk. Over the last decade or so I’ve become a more cautious driver and while I’m by no means a super fantastic driver, I try not to be an inconsiderate prick to other drivers and I can usually keep my road rage down to about a 4. I like to believe my parents are grateful that I matured as a driver because when I was a kid they hoped I would become a millionaire by the time I was 16 so someone could just drive me around.

When I was younger I couldn’t wait to drive; my roller blades didn’t work well on grass and I had retired my bike for a while after a painful crash that ripped up my favorite Bart Simpson shirt. So when I saw a commercial for the Power Wheels Barbie Corvette I knew I had to have it. I was 8 and because my Christmas list grew more expensive each year I had been given the There’s-No-Santa talk the year prior, which meant I had to present a good case to my parents as to why I should have the Power Wheels. I couldn’t argue that I had been good all year because we all knew the truth about that. The only thing I could come up with was, “just think of how good a driver I’ll be by the time I’m 16!”. By the way, I really thought the car would last me till then. I was a very wishful thinker at that age. In reality all I wanted to do was drive to my grandmother’s house (who lived next door), pick up my cousin (who lived there along with my aunt and uncle) and drive us to the local mom and pop convenience store that was only 2 blocks away.

Christmas Eve arrived and I remember not wanting to sleep so I could listen to my parents putting out the presents, thus determining whether or not I got my car and if I’d make a good spy in the future. My little brother was still about 4 years away from having his childhood ruined with the There’s-No-Santa talk so until then my parents continued with the charade. I ended up falling asleep (horrible spy), but woke up at the ass-crack of dawn on Christmas morning and bolted to the living room. I waited for and woke up no one. There it was, my very first car sitting under the tree, waiting to be driven off into the sunset/convenience store.

My scream woke up the rest of my family so they got up and joined me and the rest of the presents. I sat in my corvette while we all opened presents. I don’t remember what else I got, and I’m pretty sure at the time I didn’t care, which I’m sure my parents appreciated. After everyone finished opening presents I was FINALLY allowed to practice driving my new ride but, out of fear that I might think I knew what I was doing and would accidentally drive into real-car traffic, my parents made me practice inside.

If you had a Power Wheels or have ever driven one you’ll remember that the only thing you had to do to make it stop was take your foot off the pedal. 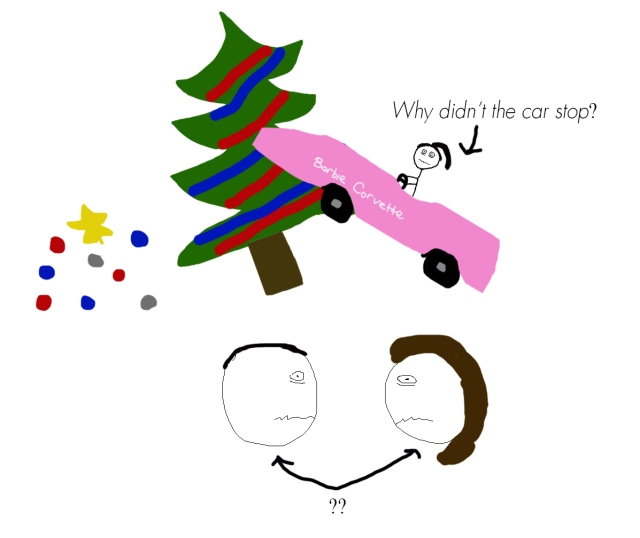 Unfortunately I had quite the hard time grasping this concept and drove right into the Christmas tree; up it to be exact. My very loving parents took the blame on this one and decided that I didn’t have enough room to practice, which they optimistically figured caused the accident. They were also hopeful that this wasn’t a glimpse into the future, the prequel to “Jenn Drives a Real Car”, if you will.

So after breakfast my parents carried the car outside and positioned it so that, if driven straight, would take me directly in front of my grandmother’s house.  My parents stood in the front yard to see me off and, before I began my journey my dad said, “don’t forget to take your foot off the pedal to stop.” At 5 MPH it took me a couple of minutes to get there, which should’ve been enough time for my father’s instructions to sink in. It wasn’t. My 5-year-old cousin just happened to be playing outside with her new toys and got really excited when she saw me drive up with the new getaway car.

That was until I still hadn’t remembered how to stop and ran right into her, pinning her against our grandmother’s porch. (I didn’t draw a panel showing her actually pinned against the porch because I’m sure I can go to prison for that, I don’t think there’s a statute of limitations on Power Wheels accidents)

Listen, at 5 MPH I’m sure a Power Wheels doesn’t sound like much but to my pinned 5-year-old cousin I may as well have been driving a tank. My parents walked up right as it happened and were completely horrified, as would any parents who just discovered that their child was capable of vehicular manslaughter at age 8.

My dad made me get out of the car so he could push it back home while my mom, aunt, uncle and grandmother made sure that psychological damage was the only thing I caused. Fortunately, other than ruining her Christmas she was fine.

Eventually I learned to take my foot off the pedal to stop the car but that Power Wheels driving experience did kind of set the tone for what kind of a driver I would be from ages 16 to about 22. I’m humble enough to admit that I was a tremendously terrible driver who probably should’ve been forced to ride the bus. Everything you read in my Driving Etiquette posts are almost all things I’ve done, however I like to believe I’ve learned the error of my ways and, now, only do these things sometimes. I’m not the greatest driver in the world, nor will I ever be. But when I see someone who is visibly older than I am texting and swerving into other lanes or, I don’t know, being a complete dick and not moving out of the right lane so others can get on the highway, I just feel like “come on, dude. You’re like 50. You know better, you asshole.”

I’m nobody to tell anyone how to drive but these things drive me nuts so I’m going to write about them anyway. Enjoy!